The owners of the planned development mauka of Pi'ilani Highway, Pi'ilani Promenade, held an informational meeting last night at the Kihei Community Center.  The meeting was billed in advance as a 2 hour meeting from 6 to 8.  In practice, there were about 200 attendees for the meeting which was a half hour presentation with the rest of the time allocated to food & availability of representatives to answer questions one-on-one rather than in a public forum.  Poster-boards with plans and artists concepts were available for inspection but there were no handouts. 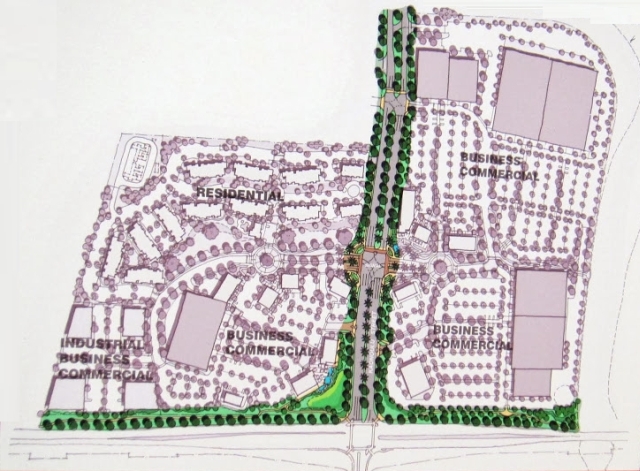 The presenters acknowledged the format was unusual which indeed it was.  It avoided public airing of community concerns which worked to Safafin Realty Advisors' advantage short term.  Whether this was the right long term strategy for gaining community support remains to be seen.

The project is to be bisected by the planned Upcountry Highway.  It will be mixed use, not just commercial.  In addition to the commercial component, it will include a multi-family housing component, some affordable housing, and a 2.5 acre park.  An off-road bike & pedestrian path is planned, separate from the current bike lane along the highway.  They pledged no domestic water for irrigation, rather they will use brackish well water until a reclaimed water source is in place.  Architects Orange, a full-service architectural, master planning, and design firm located in Southern California is engaged in project planning.

Other miscellaneous details were discussed.  The multi-family housing project is planned to consist of 226 units in a 2- & 3-story configuration.  There are no plans to connect to Ohukai Road on the left nor to span Kulanihakoi Gulch on the right.  The project is bisected by Ka'ono'ulu Road which will become a major highway when/if the planned Upcountry Road is built.  They have been working with the state in suggesting a state-owned walkway cantilevered off the existing bridge over Kalanihakoi Gulch which would provide a safer route to the planned Kihei High School to be located on the other side of the gulch.

eXp Realty is a nationwide cloud-based brokerage licensed in Hawaii as follows: